A Critique of Phillips, McManus, and Nelson on Central Bank Demand for Gold and the Initiation of the Great Depression

In a chapter title, “The Role of Gold”, the authors summarize arguments of their contemporaries concerning gold.


It has frequently been asserted in certain quarters that the recent disaster was brought about by an insufficiency of gold to support the price level, or that it was the result of an inadequate rate of increase of the world’s monetary stock of gold. Otherwise stated, it is insisted that prices have necessarily fallen either because the gold supplies of the world at large are insufficient in the absolute sense, or because the per annum rate of increase in the world’s monetary gold stock has failed to keep pace with the rate of increase in the physical volume of production. Or, it is argued that maldistribution of the available supply of gold is responsible for the trouble. It is also asserted that the inherent nature of the gold standard itself is a necessary and sufficient explanation. (38-39)

In the two decades preceding the Great Depression, central bank holdings of gold as a percent of the world monetary gold stock increased from 63 percent in 1913 to 90 percent in 1929. Although they had increased their share of the world’s monetary gold, especially after World War I, this did not result in an equivalent expansion.

The appetite of central banks for gold far exceeded the actual increase in the money stock. The authors recognize this problem.

The gold stock tended to increase at a rate of 2 to 3 percent per year. Central bank demand increased at a rate faster than the supply of gold grew. They go on to downplay the problem because “because of the superior credit expansion possibilities of gold in central banks as contrasted with gold in circulation as a medium of payment (47)." In short, central banks increase liquidity by using a gold reserve ratio of less than 100%. Central bank consolidation of the gold stock, then, is said to have had no connection to the initiation of the Great Depression. This is strange indeed and, as I will go on to show, simply incorrect.

The end of the chapter considers the most poignant formulation of the gold-standard theory of the Great Depression.


The idea that maldistribution of the world’s gold supplies with excessive concentration in the two countries, France and the United States, is the reason for the decline in prices, carries a greater degree of plausibility. (51)


Indeed, the sudden breakdown of commodity prices can only be explained by two events on the monetary side that have come into the foreground since the middle of 1929 * * * The second factor which since the middle of 1929 has tended to reduce the world’s supply of means of payment is the very unequal distribution of gold caused by tremendous gold imports into France and the United States.

They respond by arguing, since Cassel is referring to events from 1929, his argument that gold hoarding led to the Great Depression is surely incorrect. Prices began dropping in the fall of 1929, which is for some reason cited as evidence that Cassel’s assertion is mistaken. Even if we were to cede this ground, the authors appear to be unfamiliar with the situation in France. In a bit of sloppy scholarship, they take their own citation at face value rather than digging through the data. If they did, they would have seen that France increased its gold reserves by about 33% between June 1928 and September 1929. By the end of 1930, France had nearly doubled its monetary gold stock since June 1928. 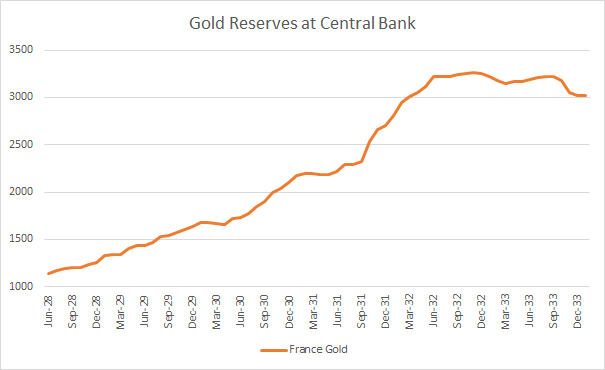 There is no excuse for this. The authors appear to be aware of French monetary policy, but only consider the impact of increased demand from France after September 1929.


It is quite true that the gold holding of the Bank of France reached the enormous total of $3,218 millions in June, 1932. But this, it is to be emphasized, was long after the depression and the fall of prices had set in. The fact that the gold reserve of the Bank of France more than doubled from September, 1929, to June, 1932, might well be regarded as evidencing maldistribution as of the latter date, but it does not explain the start of the fall of prices in late 1929. The nationalistic hoarding of gold was a contributing factor in the precipitancy and persistency of that fall, once started, but it by no means follows, as Cassel and others contend, that the initiation of price decline should be attributed largely to the pre-depression maldistribution of gold. For the fact remains that the most striking maldistribution of gold occurred after the decline in prices set in. And it appears more probably that the price situation brought about the alleged maldistribution, than does the converse argument. (53)

If the authors had considered French monetary policy before September 1929, they could not have arrived at this conclusion. Their presentation is therefore distorted, inadequate, and wrong.

As if their narrative was not already problematic, they go on to describe the gold standard as needing management, but decry the mismanagement that led to its breakdown.


The gold standard admittedly requires experienced and skilled control in order to insure its relatively smooth working. Certain other conditions also are necessary, including a plasticity of and a reasonable agreement between costs and prices, readiness to accept payment of international debts in goods and services, and international goodwill as opposed to competitive nationalism, for it is only when these conditions are met that an international gold standard can function at all. . . . When, therefore, it is alleged that the gold standard has broken down, it is well to remember that scarcely any conditions necessary for its proper functioning have been realized. . . (54)

The culprit, they claim, was inflationary central bank policy that was bound to end in collapse. This is an odd proposition, as there seemed to be nothing inevitable about the collapse. If they were correct, certainly gold hoarding by France augmented the problem leading up to the initiation of the Great Depression in September and October of 1929. Their inclusion of commentary from Mises in a foot note helps elucidate their position as well as the errors that are included with it. Mises writes,


The dislocation of the monetary and credit system that is nowadays going on everywhere is not due – the fact cannot be repeated too often – to any inadequacy of the gold standard. The thing for which the monetary system of our time is chiefly blamed, the fall in prices during the last five years, is not the fault of the gold standard, but the inevitably and ineluctable consequence of the expansion of credit, which was bound to lead eventually to a collapse. (55)

Within a single country, Mises is right. Monetary expansion, all else held equal, will cause gold outflows that can only be offset by a subsequent contraction. Gold flows are the result of a discrepancy between exchange and interest rates in different nations. However, if these rates move together, there is no reason to expect that a subsequent deflation is inevitable. Simultaneous expansion (contraction) can lead to a general increase (decrease) in prices worldwide. If reserve ratios of central banks move in concert with one another, expansion is not a problem. However, the political situation did not allow for this, as French officials no longer wanted to participate in the gold exchange standard after 1927. Gold hoarding by France, however, is not the equivalent of an inevitable contraction that follows expansion. It was an example of independent central banking policy upsetting the existing balance of exchange rates.

This argument deserve more elucidation. The gold standard required management because of the difficulties that arose when exchange rates oscillated. As Barry Eichengreen has shown, European central banks typically followed the Bank of England’s lead in setting interest rates before World War I. The rules of the game, then, were simply for European central banks to coordinate with the Bank of England. Apparent harmony before World War I suggests that the program worked. But the coordination broke after World War I. The Bank of England lost her place as leader in Europe. When she tried to reclaim the position with the establishment of the gold exchange standard, she was in no position to exercise the dominance that she once held. Stability of the gold standard before World War I was a function of banks expanding and contracting in concert with the Bank of England. If a central bank expanded independently, than gold outflows would encourage tighter policy, forcing it to contract the money stock in order to stem the outflows. It was therefore impossible to state definitively whether banks had expanded the money stock by too much or too little except by referencing other central banks. France ceased to coordinate policy with the Bank of England after 1927. This was enough cause to bring down prices and discourage investment and production abroad. Falling prices and policy uncertainty were enough to bring on the Great Depression.

Phillips, McManus, and Nelson believe that the gold exchange standard represented “the world’s greatest experiment with a ‘managed currency’ within the gold standard”, but the nature of it was not much different than the classical gold standard (56). Smaller central banks had previously used foreign exchange to supplement their incomes as result the interest earned by lending their gold to larger central banks. This practice was expanded by the gold exchange standard. Consolidation of Europe’s gold at the Bank of England appears to have been the greater problem as it bred mistrust that led the insane Bank of France to hoard gold. (See Glasner for another example of an Austrian, this time Hayek, misdiagnosing the problem with the gold standard.)

As I seem to be noting a lot lately, those of you who disagree should read my paper where I describe in detail the distortions created by the mass adoption of gold-backed legal tender regimes after 1870. You’ll find that the international gold standard never existed except by intervention. Before that, it was practiced predominantly in England where merchants found it accommodative of large transactions.This is not to say that gold didn't serve as money before, but its use in no way represented an international gold standard.